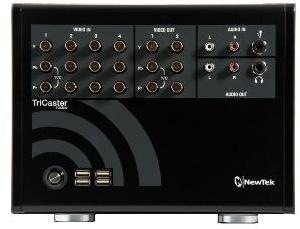 NewTek introduces hi-definition TriCaster for under $5,000

August 29th, 2012: NewTek has released their brand-new TriCaster 40 for only $4,995.00. The TriCaster 40 provides live video-switching with four video cameras or other live sources, two computer feeds, three media players including videoclip playback, titles and other graphics, a pair of Downstream Keyers with independent scaling and positioning, plus professional chroma-keying with virtual sets and double-box effects. Like other TriCasters, you can record the live-switch to the internal hard drive for archiving and editing purposes plus stream to the internet in real-time. And the TriCaster 40 is resolution-independent, meaning you mix live inputs from both hi-def and standard-def sources without adding scalers. 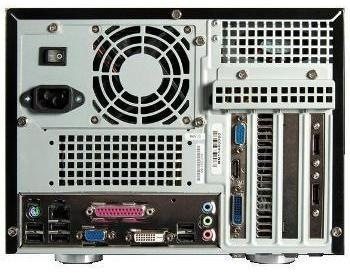 The TriCaster 40 works with 1080i, 720p, 480i 16:9 and 480i 4:3 live video sources. The main row of video output connectors sends out the session resolution (1080i, 720p, etc.) while the second row of output connectors always provides standard-def output either as component video or simultaneous Y/C and composite video output. Audio inputs are one 1/4-inch phone for mic input plus a pair of line-level RCA inputs. Audio outputs are a pair of line-level RCA outputs and one 1/4-inch phone plug for headphones. While the TriCaster 40 has a software mixer audio for running audio, using an external audio mixer and sending the final mix to the TriCaster 40’s audio inputs is probably the best way to go.

The TriCaster 40’s internal hard drive records up to 20 hours of 1080i footage or 120 hours of 480i footage, encoded as either QuickTime files or web-quality H.264. Streaming output includes Adobe Flash plus Windows Media Push/Pull. Playback media formats (at the switcher) include AVI, DV, DVPRO, H-264, MOV, MJPEG, MPEG 1 and 2, MP4, WMV and more. Still image support includes PSD, PNG, TGA, TIF. AIFF, MP3, WAV and more. While the TriCaster 40 can record your live switch to hard drive, it can’t perform multi-tracking video recording like the TriCaster 455 or 855.

While you can certainly perform live video-switching using the TriCaster 40’s keyboard and mouse, the optional TriCaster 40 CS control panel is available for those users who prefer using an external panel with buttons, knobs and a T-bar.

The TriCaster 40 doesn’t include the software video editor included with NewTek’s other TriCaster models. You can purchase and install a standalone copy of NewTek’s SpeedEDIT software on a Windows-only PC and edit your TriCaster 40 files or export your recorded files to other editing software such as Final Cut Pro or Premiere. 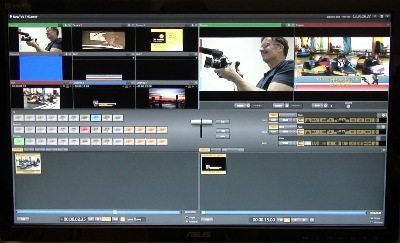 The TriCaster 40 will look very familiar to anyone who has used any of NewTek’s other HD TriCaster models. The interface is essentially the same, with an FX, Program and Preview row, four virtual inputs, a pair of DSKs that can be scaled/positioned, real-time effects, one DDR for playing back video clips, a pair of graphics channels for stills and titles, audio mixer, on-screen monitors for your live video sources, network inputs, DDR and graphics. Controls for recording to the internal hard drive, streaming and settings for the aux out and multiview port are also included.

Speaking of the multiview port, the TriCaster 40 doesn’t include a true multiviewer that allows you to display all of your live video sources, etc. on a second monitor. Instead, the TriCaster 40’s multiview output allows you to send out Program output or what is punched up on the Preview or FX rows via the HDMI or VGA ports. This is very, very nice because it allows you to send out the TriCaster 40’s live-switch or program output out to a monitor, projector or other device that works with HDMI (or VGA). You can even send out an isolated feed to a monitor or project by punching up the FX row and sending it out to a dedicated monitor or projector, say at a church where you want to lock a camera onto the pastor or choir and see them on that one display.

Title templates are included with the NewTek TriCaster 40 to create titles on the fly while you perform live switching. Or you can create CG pages and other graphics files with PhotoShop and import them into the TriCaster 40. Finally, you can install LiveText on a Windows PC and send customer graphics to your TriCaster 40’s DSK channels in real-time while switching. While a standalone copy of LiveText is included with the educational TriCaster 40, commercial customers will have to purchase a copy of the software. 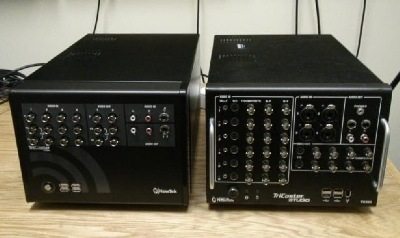 Tricaster 100, Pro, ProFX, Duo, Studio and Broadcast and even VT owners should find the new TriCaster 40 as the ideal HD replacement for their older systems, or certainly as a second or third system.  The feature-set found with the new TriCaster 40 is amazing. You have two independent downstream keyers or DSKs that can be scaled and positioned anywhere on the screen. The DSKs work with all of the TriCaster 40’s video sources including live video cameras, DDRs, computer feeds, graphics and titles for PIP effects, etc. The chromakeyer is easy-to-use and provides professional results for the included virtual sets and double box effects as well as simple chromakeying. Using NewTek’s Virtual Set Editor software ($995.00) you can easily create custom virtual sets for the TriCaster 40. And the ability to mix HD and SD inputs without having to add converters greatly simplifies how much equipment you need to work with.

A huge improvement over the standard-def TriCaster and the VT series is how the TriCaster 40 works with iVGA. When bringing in a 1280 by 1024 (or any other computer desktop resolution) display into a standard-def TriCaster or VT system, the results are generally fair at best. Because you are converting a higher-resolution image into standard-def video (752 by 480 pixels) you are throwing away a lot of information that often results in a blurry or soft picture. Because the TriCaster 40 and other HD TriCasters work internally at 1920 by 1080 pixels, bringing in a 1920 by 1080 or even a 1280 by 1024 computer graphic remains sharp and crystal-clear. This is true for PowerPoint, Media Shout and Easy Worship “presentations” as well as hi-resolution images shot by a digital camera. Taking the process a step further, you can bring in those iVGA images as a DSK and then scale and reposition them anywhere on the screen that you want to.

Users of older TriCaster models and the VT series will appreciate the ability to send out the live-switch as simultaneous HD and SD video via BNC connectors. You can  also send out either the Program, Preview or the FX bus via HDMI. Like the older TriCasters, professional title templates are included that can be edited on-the-fly while live switching. Like all TriCasters, you can record the record the live switch to hard drive and stream at the same time, but now you can save the file and stream as HD. All of these are huge leaps foward in capability at an extremely affordable price. . . and you have an extremely easy learning-curve when going from your existing SD system to the new HD TriCaster 40.

For owners of the TriCaster 300, 450 series and 455 plus the 850 series and 855, you can consider the new TriCaster 40 as a backup for those systems, or as a substitute for smaller jobs. (Just remember that the TriCaster 40 doesn’t work with 1080p sources and doesn’t send out 1080p video). This could open up lots of new markets to you as a producer, because your overall equipment costs are substantially lower when using a $5K TriCaster 40 versus a $20K TriCaster 455 or $30K TriCaster 855.

While most people think of the TriCaster as an all-in-one solution for doing live video switching, recording and streaming, given the low-cost of this new TriCaster, why not use it with your other production equipment as a dedicated virtual-set box with easy-to-use professional chroma-keying and high-quality virtual sets? Or use the TriCaster 40 as a downstream character generator? Or use it as a video recorder and encoder for live-streaming? The possibilities are almost endless.