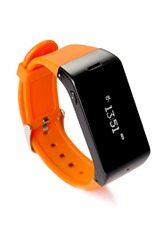 Wrist watches for as long as this one can remember have been around for keeping track of time and date – but over the years, gradually, wrist watches have undergone a steady change in their design and functionality or features. First came the chronological designs with more than just date and time, then digital followed by automatic and solar powered. At a point in time, the concept of internet time too caught the imagination of millions only to later fade away because of its odd system. Today, the latest fad among wrist watch makers is to include some amount of intelligent functions such as Bluetooth connectivity, heartbeat monitor, pulse meter and so on. Some even take your blood glucose levels! MyKronoz ZeWatch, while won’t tell you your blood sugar level or display internet time, will however, connect wirelessly with your smartphone, PC or any Bluetooth enabled device. Yes, this new age watch is more than just a conventional digital watch – it is an extension of your phone.

The definition of cutting edge technology today also includes radical design and the MyKronoz ZeWatch is as radical as it can get. A sleek flat surface with glossy black glass encasing hardened to resist scratches and drops over a resin band that wraps tightly around the wrist, with a few buttons to each side and a tiny USB port to charge the unit via an external travel adapter or USB cable completes the ZeWatch. However, what immediately catches your attention is its compact size. It is actually smaller than a G-Shock, if you don’t count the length but are only concerned with the width or the thickest portion of the watch. Available in two color choices of black or orange, the latter gives it a funky look while the former remains more inconspicuous (exactly what James Bond would love to own, pity he doesn’t yet). Both the black and orange ZeWatches have the same digital display frame in black, it is the band that differs.

The Features And Specifications

While it functions exactly like a regular watch, displaying the time and date or whatever else you configure it to show, there are a few smartphone specific features that give it the edge over modern day wearable gadgets.

Warming up already? Here’s a the tech spec for those who understand gizmo jargons. 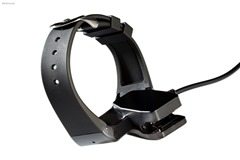 Why The ZeWatch Isn’t Just Another Fading Technology?

The fact that it isn’t just a watch won’t suffice for many. How about the ability to take hands free anywhere and everywhere? Out on an early morning jog, walking the dog, taking the subway to office, partying late at night on the rooftop, driving, cycling, it doesn’t matter, just accept or drop from the ZeWatch and keep your phone safe and secure in your pocket. Add to this the fact that it won’t ever let you get out of sight of your phone and you get a security feature as well. Other watch makers might eventually catch on to this concept, and a few already have, but this technology of merging wrist watches with smartphones is nowhere close to fading away, on the contrary, this may just be the beginning of true wireless connectivity. Oh! It also stays accurately synced with your smartphone’s time, which feeds off the service provider or internet connectivity so you never have to worry about setting the right time and date.

When you drive, even with a Bluetooth enabled speaker system that links up with your smartphone, you have to look at it to read the caller’s name, browse the address book and so on. Wearing the MyKronoz ZeWatch, you need not take your eyes off the road ever, get all notifications, messages, alerts and calls in your field of vision while keeping your hands on the steering wheel. Voice commands aren’t an issue either thanks to the perceptive microphone and speaker functionality so speak to it, caress it as you would your Bluetooth headset or handsfree.

Time To Move Beyond Just Time

Granted, technology until proven is just another gimmick but after experiencing the ZeWatch, anyone will feel that some technologies are designed to last and only become better. Practically devoid of bugs and errors, this simple yet astonishingly simple watch, is the future of communications. Who knows, some day we may even see a ZeWatch that works as a complete smartphone. Angry Birds on your wrist even?

Thanks to our friends at MobileFun for the review unit. See more at this link!