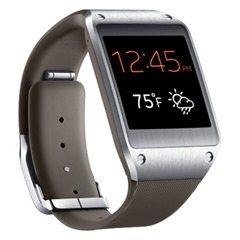 Samsung Galaxy Gear – Worth The Time?

Being the first of its kind, only a few smart watches yet sold worldwide, it is a tough concept trying to figure out what to expect from such an extremely young technological item. Samsung, always the bold one to advance technology and hence reap its rewards has yet again outdone itself with the Galaxy Gear, which one has to admit is definitely conceptually intriguing but does it do enough to justify its place in the coming future?

Let’s first look at its features. Like many mobile devices, the Galaxy Gear does sport plenty of useful software and hardware stuffs such as a built-in camera, Super AMOLED screen, and S-Voice however I feel it falls short in delivering the basic functions one would require from such a wearable companion and has some notable hardware issues.

Notifications On Your Wrist?

What does the role of a smart watch entail? Well aside from giving you the accurate time, it ought to deliver notifications, which thankfully the Galaxy Gear does a splendid job of. All text messages and emails pop up just fine on the Gear even allowing you respond to a certain extent, if you are well versed with S Voice. It even lets you delete emails but trying to deliver notifications from popular services such as Facebook, Twitter and the others is tad clumsy at best.

Upon receiving a message of any kind, the phone sends information to the Galaxy Gear that then vibrates to let you know the same. However, when you check on notifications, it displays a message to check content on your mobile phone. It’s like ordering food and then being told by the waitress to go check with the chef directly! Even worse is the fact that there are third party apps that let you add this functionality onto the phone. Why could not Samsung do this? Considering the fact that its sole purpose is to deliver notifications to you on your wrist, it must be capable enough to handle notifications of all kinds.

As I researched into this oddity I came across plenty of apps that are already optimized for Galaxy Gear. Evernote, something that many folks use on a regular basis can now be used on the Gear. Likewise, you have Path and Pocket optimized for this little beauty. However, the apps market for this gizmo is still young and sparse. At best, I counted 50 apps currently available (including the watch faces or skins!)

Let’s get to the phone call and camera functionality. Yes, the Gear has a 1.9 MP camera and it works just as in the advertisement but it is at best gimmicky as I don’t know where I would find the use for it especially as it is handicapped with limited processing and capabilities. The phone call department works just fine although I felt like Dick Tracey speaking into this wrist watch.

As for the exterior, the device does sit well housed in a stainless steel casing coupled with a rubber weather resistant wrist band. Basically, it feels sturdier than previous trial attempts at smart wearables such as the Pebble Smart Watch. While tad more heavier, it is durable and does look good, in a futuristic manner of speaking. The 320 by 320 pixel 1.63 inch screen looks clear on the wrist, displays text vividly and can provide a standby analog or digital watch face too, just in case you were wondering how to check the time. Unfortunately, the screen doesn’t stay lit all the time so you even have to power it up just to see the time. To do this you press a single hardware button to the side or lift the wrist up near your eyes, which doesn’t always work well.

The lack of water resistance also means that you cannot use the Gear in place of pulling out your phone during bad weather, the beach, etc. Cheaper digital phone companions, such as MyKronoz (reviewed previously here) work equally as well for telling time, alerting you to look at your phone for messages, and operating as a Bluetooth wrist-set(tm) . However those are water resistant and their big selling point is they protect your phone by letting you keep it in your bag, briefcase or pocket.

Coming to the battery life, it is appalling to hear that the Galaxy Gear uses power saving algorithms to maximize its battery performance since it doesn’t stay active for more than one day. (although when not sync’ed with my phone it could last two days) Now my smartphone and smartwatch both need charging everyday. Wonderful!

I heard that the Sony SmartWatch can go on for couple or more days on full charge and the Pebble needs one charge per week, so why couldn’t Samsung pack a bigger battery?

A further gripe – why not use wireless charging? Samsung has been showing a very hesitant approach to wireless charging, offering it only as an added cost option, and in some cases (like the Note II) not even all variations could use the wireless charging even though the basic circuitry was in the hardware. The Gear would have been far better with wireless charging instead of the flimsy plastic charging case you have to snap it into. 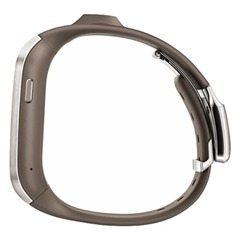 And My Ranting Goes On

Since I am in the mood to criticize an otherwise splendid technological advancement, I might as well add the lack of device support evident in the Galaxy Gear. Currently it only supports the Note 3 and Note 10.1 tablet from Samsung. I hear that backward compatibility with other Galaxy products is on its way but if you are using anything other than a Galaxy device, forget about the Gear. For those who own a Note 3 though, pairing is super easy using NFC. Once configured to a particular phone, it can be optimized for notifications, apps and settings using the Gear Manager on the phone. A few though can be accessed using the UI of the watch directly but most need access via the phone.

My thoughts on this device after using it for nearly a month? The potential is awesome but largely unrealized. Samsung simply hasn’t included enough apps or put enough design into the current apps to ‘wow’ me. It’s AMOLED screen is wasted on a nearly monochrome design scheme for the apps on the watch. Simple hacks, which can be found on the net, will let you run many Android apps directly – too bad this isn’t a default feature. Waking it up by bringing your arm up and around to see the watch face is non-ideal. A double tap on the screen to wake it up would be a nice addition.

I want to love this and use it but in the end it just didn’t do much for me. Normally we here wouldn’t even bother reviewing something this thoroughly disliked – but in this instance it’s warranted because the potential is great. Perhaps if/when more watch apps are available I will reconsider.