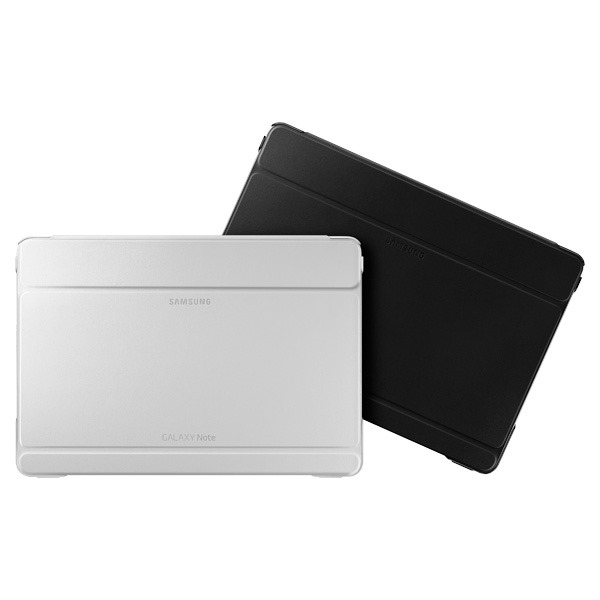 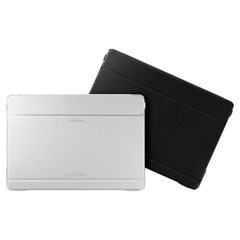 In this quick review we’ll focus on the Galaxy Tab Pro/Note Pro 12.2 Book Cover which as you might have a guessed, was designed with the Tab Pro 12.2 and the Note PRO 12.2 in mind.  It’s not only unique in the sense that it’s the first Samsung case we’re aware of that’s build for two devices, but also because it was built to accommodate the rather unusual and enormous 12.2” tablet size. This review was done using the Galaxy Note PRO 12.2 LTE (SM-P905). 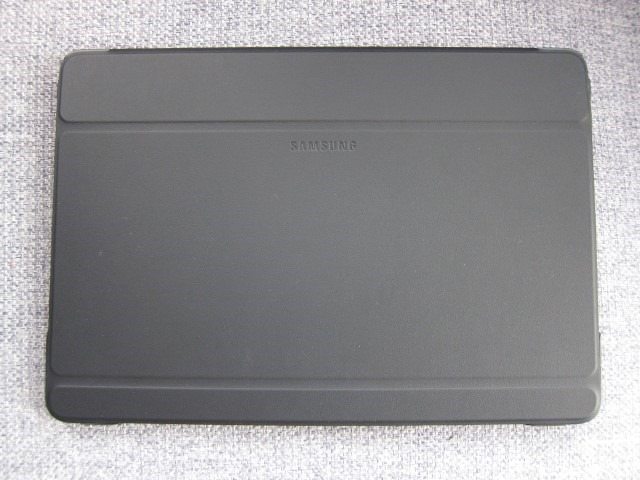 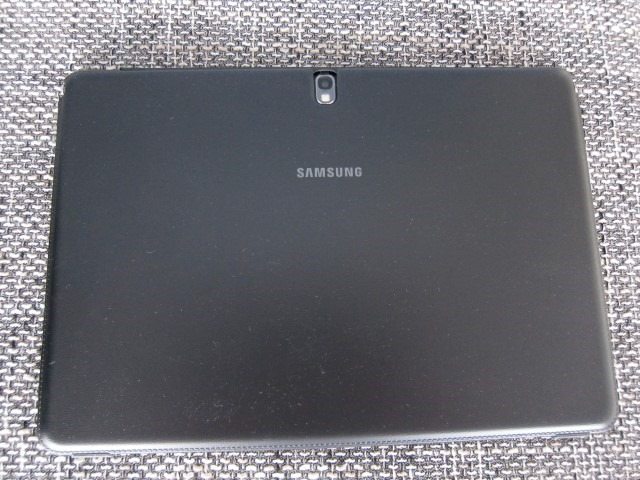 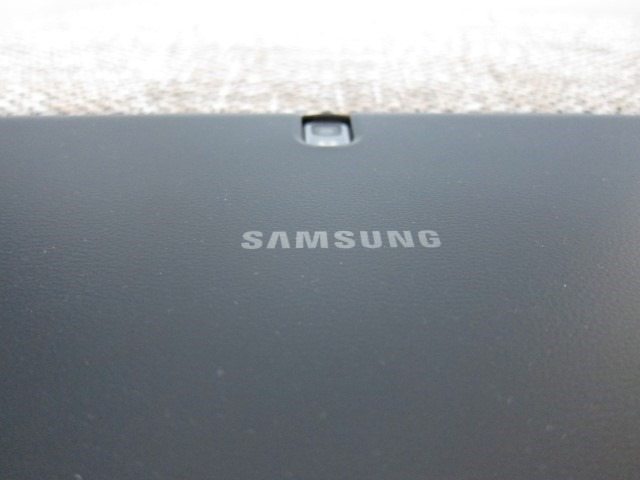 Continuing the tradition of previous Book Covers, the EF-BP900B offers basic scratch and bump protection with the promise of an exact fit, light weight and thin design. As with previous versions it also comes in both White and Black. What you definitely are not getting here is a case with extra padding or able to withstand drops. At a fairly high price, 12.2” and weighing around 750g, the Note PRO is not something you’d want drop, no matter what the case manufacturer promises. In fact with a tablet of this size and weight, we’re happy Samsung have opted to go with a case that’s as thin and lightweight as possible. 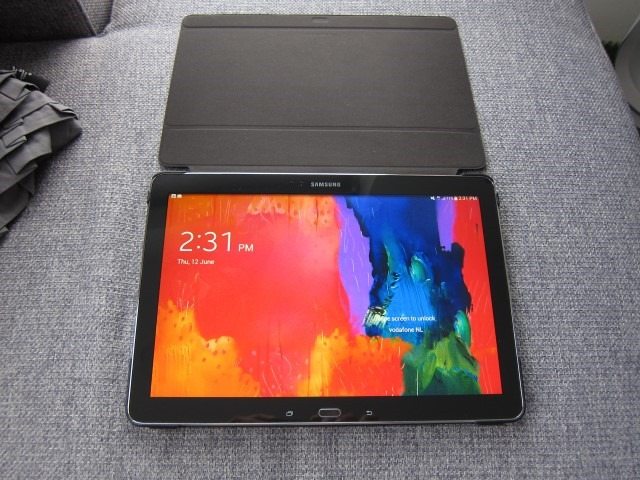 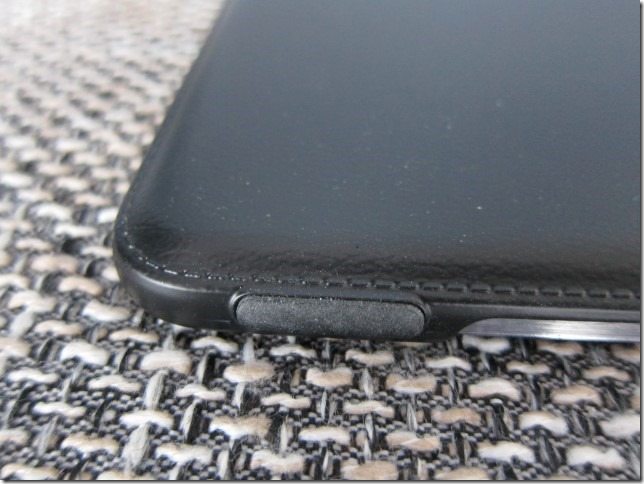 From a design perspective, except for the use of Samsung’s now trademark faux leather back, (complete with faux stitching) the case looks exactly like earlier versions. The leather back adds more elegance and looks quite convincing, but the rest of the case is almost exactly what you’ve come to expect from Sammy’s Book Covers. It still consists of two basic parts: a rear cover and a foldable front flap. The rear cover protects the entire back, leaving an opening for the camera and flash. The cover continues to the side, protecting the four corners, but leaves the S Pen bay, speakers and microSD port exposed. There’s however one small detail that might be annoying for those of you with a 4G/3G versions of one of these tablets: the SIM Card slot is covered, forcing you to remove the entire case if you want to change SIM cards. While most people don’t change SIM cards that often, but if you do, this can quickly get annoying. 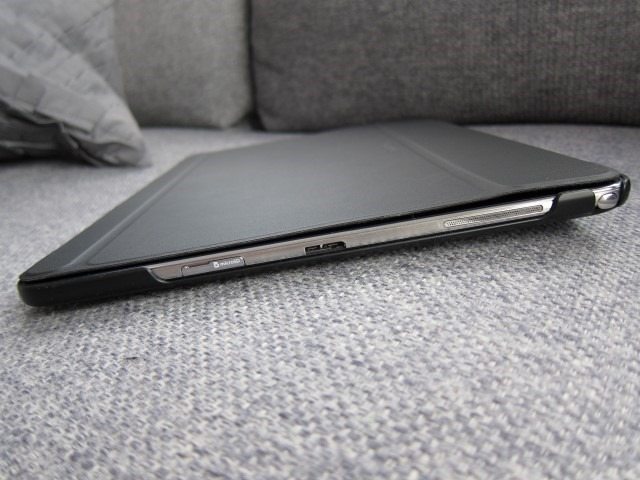 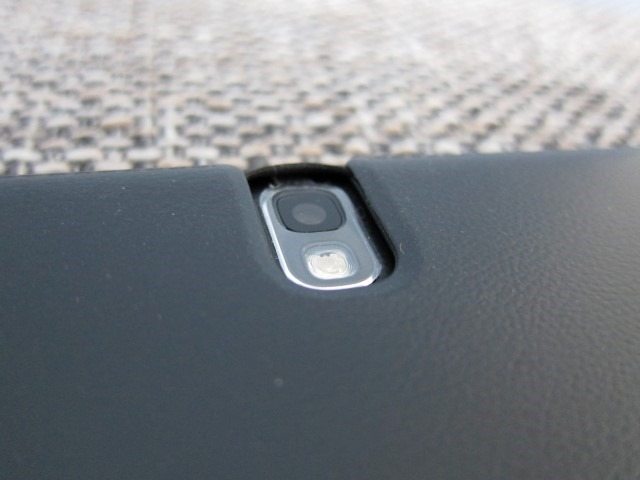 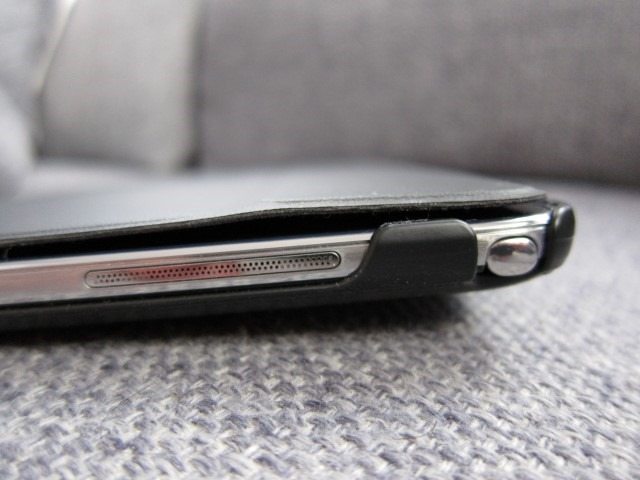 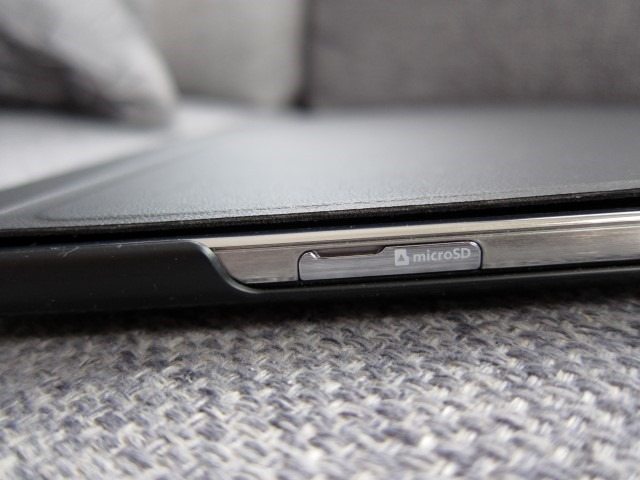 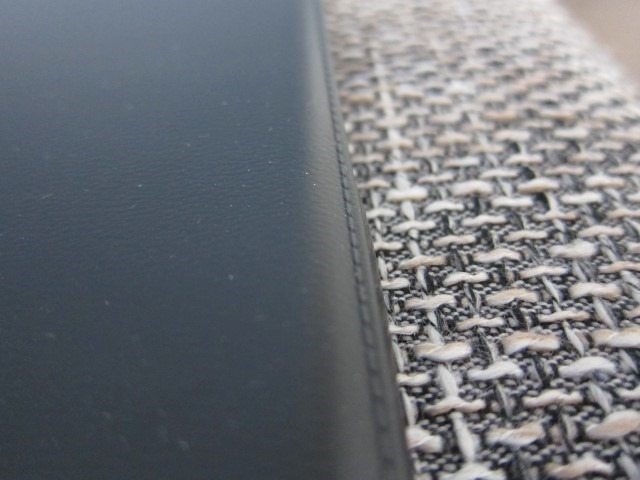 The front flap serves two purposes: it protects the screen and because it’s divided in three sections it also double as stand. This stand also is quite functional too, allowing the tablet to stand upright and due to the inclusion of magnet, the tablet can be positioned with a slight incline that’s perfect for typing on your lap. They even went as far as add two rubber feet to prevent the tablet from sliding when standing upright. Something we do of wish Samsung would do is the inclusion of the S View Cover, similar to what you’d find on the Note 3 and S5. They did build something similar with the Daynote function, but that still requires you to open the flap, which at that point you might as well use the tablet. A Clear cover would not still protect the screen, but also glanceable info. 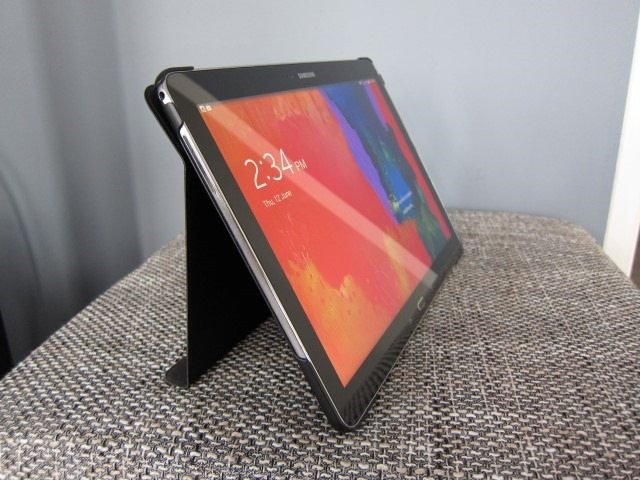 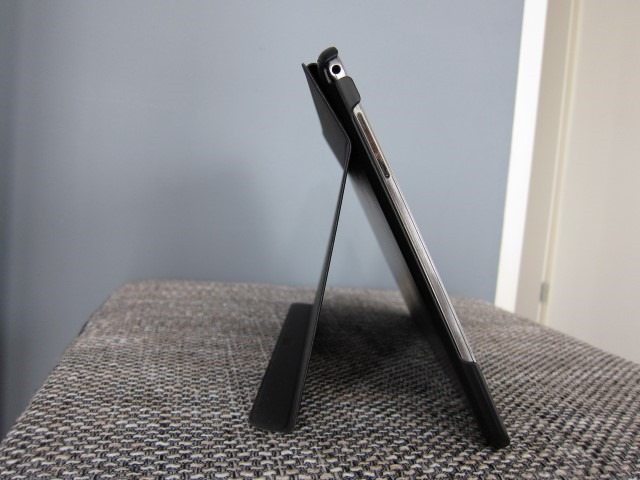 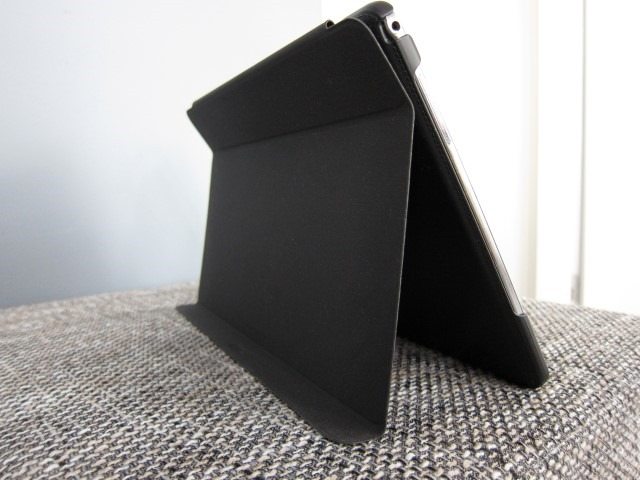 Due to the inclusion of magnets, the flap can also be used to turn on the screen, automatically unlock the device or even activate the Daynote function. This basically shows the date, time, weather, schedule and drawings when you open the cover. 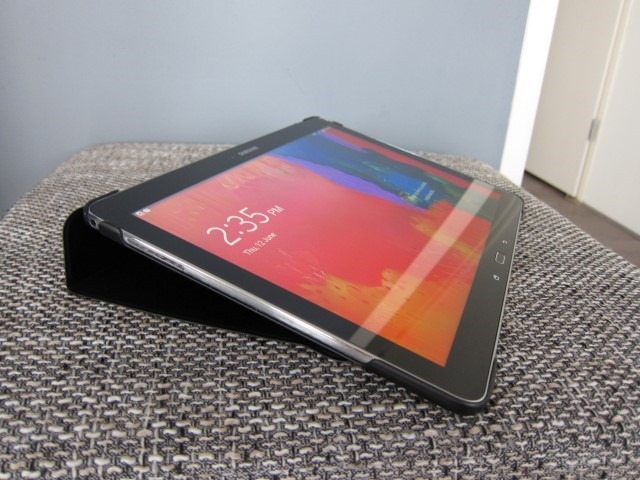 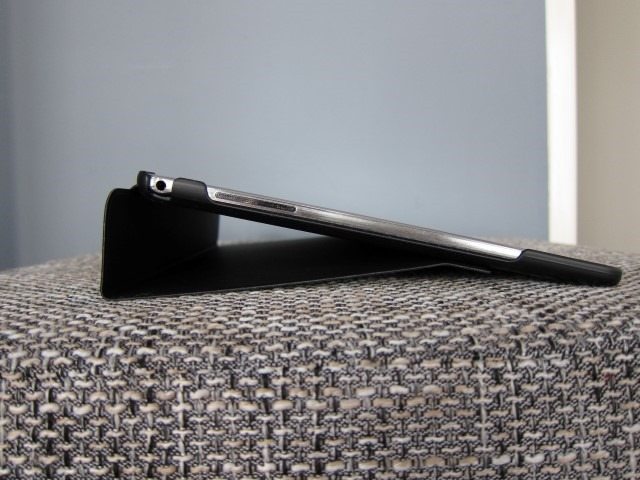 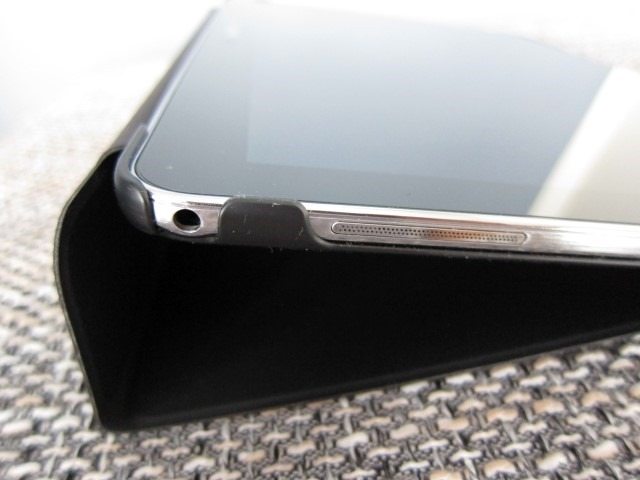 If you own a Tab Pro 12.2 or the Note PRO 12.2 this is basically the case to get. No surprises here: you get a thin and light case that protects your device from scratches and bumps. We also like the fact that flap can unlock the screen and the new Daynote feature is a nice but not very practical. Owners of the Wi-Fi versions of these tablet will love this case, while owners with 4G LTE and 3G version of the tablet that swap SIM cards a lot will be slighted annoyed that you have to remove the entire case. If Samsung adds the S View cover this would be the perfect case, but for now it deserves a 9 out of 10.

The EF-BP900B can be purchased at MobileFun. 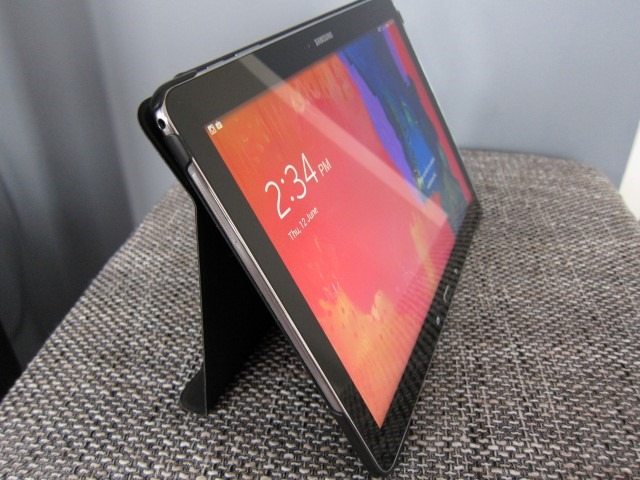 Can double as a stand (vertical and lap)

Flap can unlock screen or wake device up