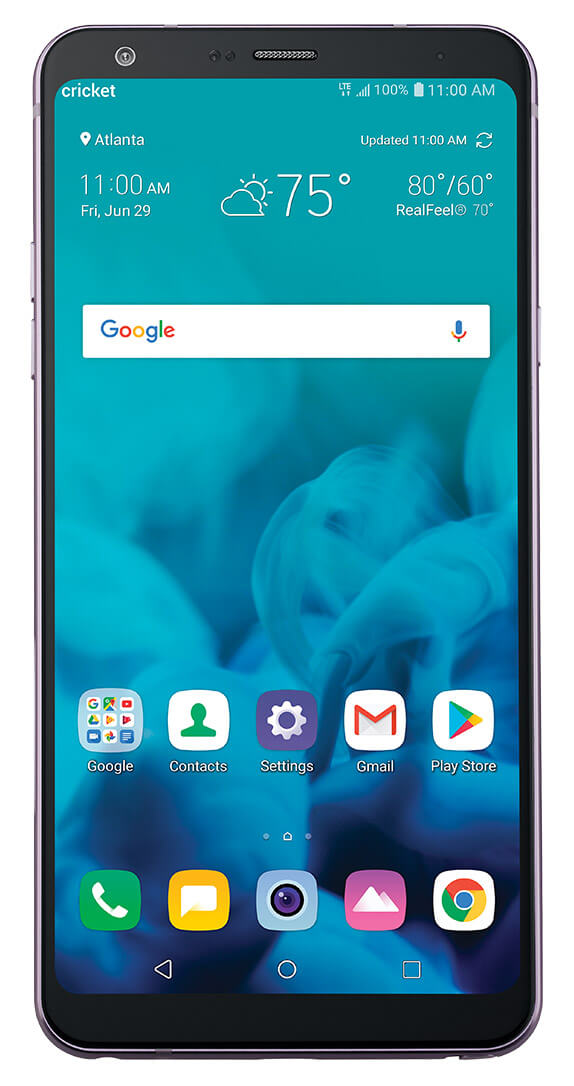 I don’t have “huge” hands but I certainly appreciate people who complain that they have difficulty typing on their smartphone touchscreen. When given the option of using a pen or stylus, I’ll go with that every time. And, in my case, it’s not because I can’t navigate on a touchscreen. I just find holding a pen more natural. The LG Stylo 4 comes with a very slim stylus with a tiny micro-fiber Tip. And it works REALLY well. 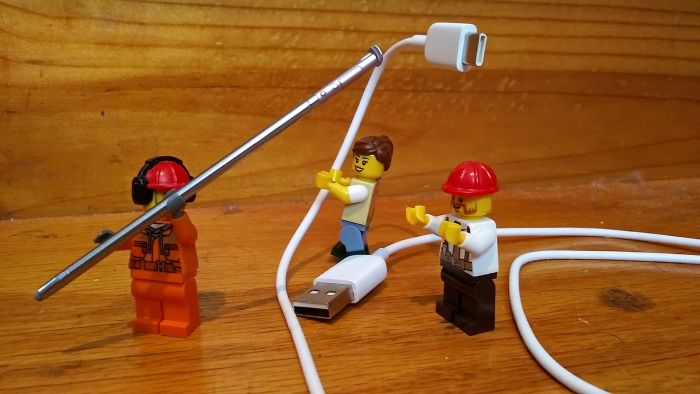 I had my little friends help me show off the stylus and the USB type c Connector that comes with the LG Stylo 4 smartphone. The stylus is thinner than, say, the ones that Samsung makes, but it feels fine in my hand. If you happen to be right-handed, it’s very easy to remove the stylus from the bottom right side of the phone. I use my thumb nail to hook under the small “tab” of the stylus. You also have to insert the stylus correctly into the slot, but it only takes a couple of tries before you automatically understand the proper orientation.

When one removes the pen from the bottom of the phone a little drawing of a pen appears on the screen (upper right on the screen grab here). Tap that to reveal the pen apps. Once open you can hold that “pen” icon and move it anywhere on the screen that is more convenient.

As I had previously saved a “Pop memo” you can see a small thumbnail of it on the left side of the screen. If I tap on that thumbnail, it opens to full screen, ready for further editing.

“Capture+” is used for screengrabbing, obviously. 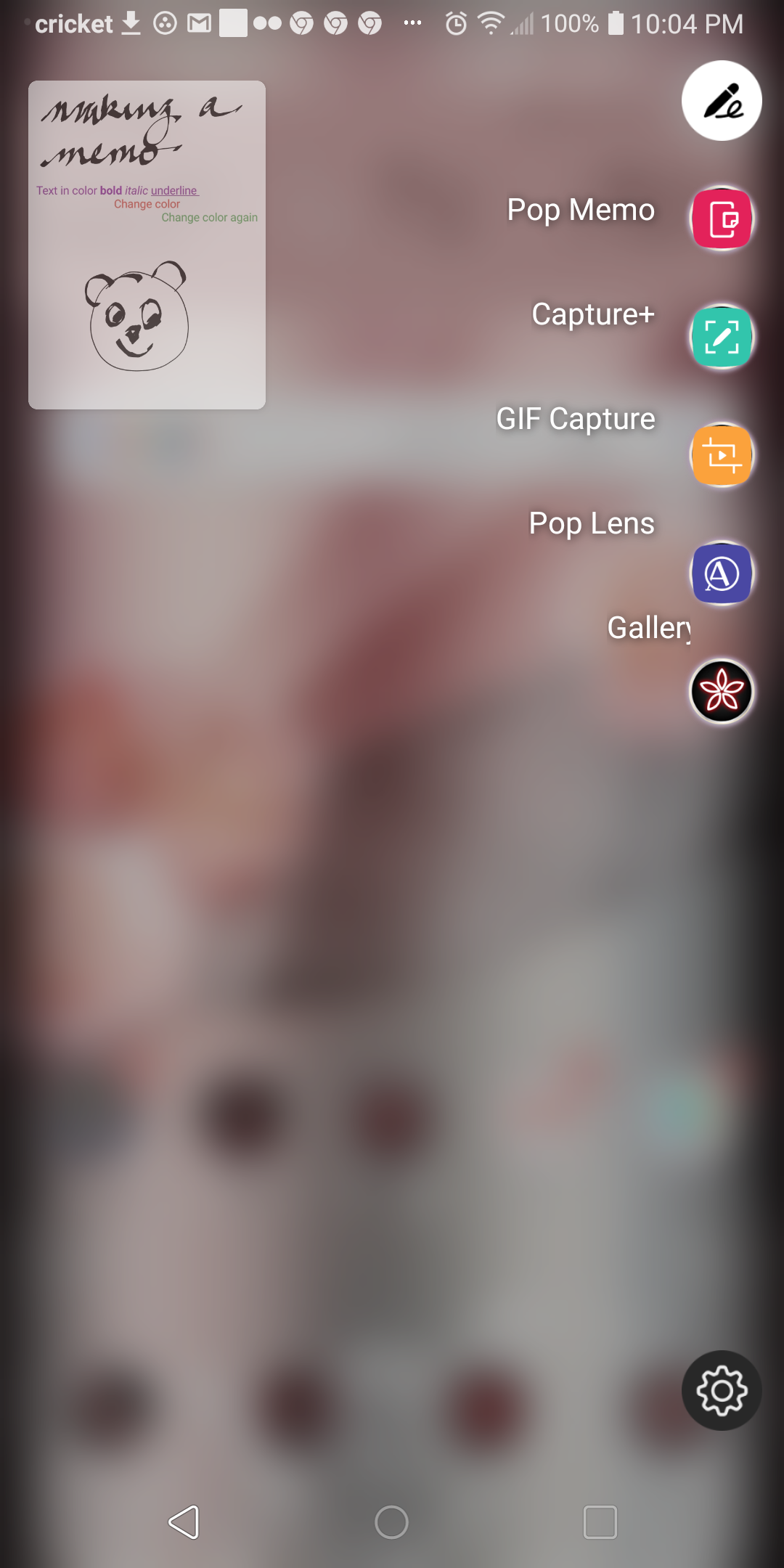 One of the interesting features of this stylus is the Pop Lens to magnify areas of the screen.  A tap on the Pop Lens brings up a window. Using the two handles (top and bottom of the window) I can move it around to magnify whatever part of the screen I need. It’s obviously very useful for reading certain web pages. Tap the Three circles to cycle between turning the area negative, grey tomes, negative gray tones. Tap the “rectangle-in-rectangle” to increase the size of the magnifying box. 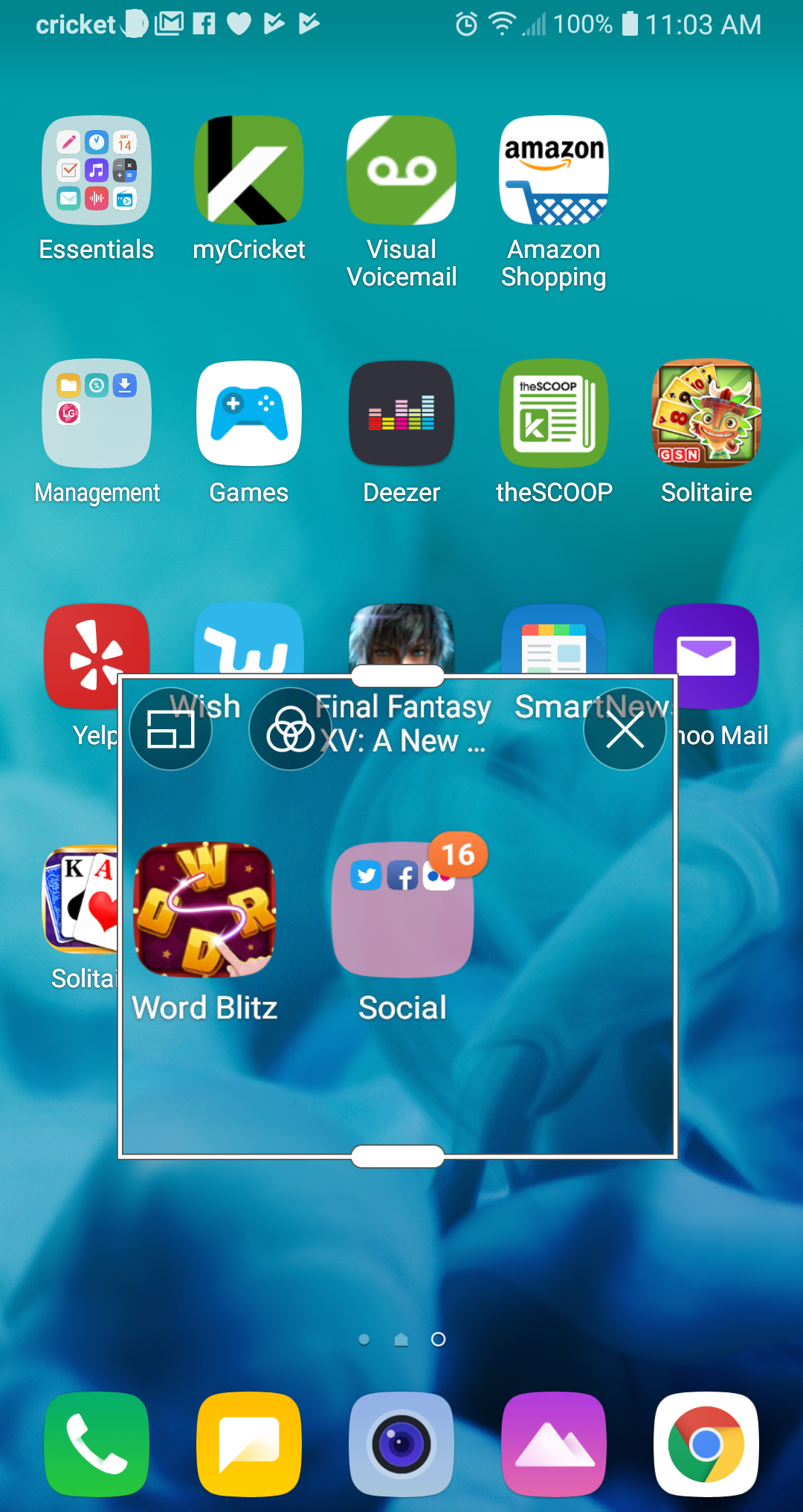 I went to this web page and attempted to save a “GIF Capture“. A Box appears on the screen and you can change its size to fit exactly what you wish to “Capture”. When you are ready to start recording, just tap the RED button at the bottom of that box and away you go. Then save it.

One really convenient feature which is possible using the Camera App is automatically scanning QR codes. You can turn this feature On or Off. Once it’s on, you just focus on the QR image, keeping it in the center of the “yellow” square and it translates whatever the code is, in this case, it’s to a web page. This is quite nice as I don’t need to search for and install another app. Good job, Cricket! 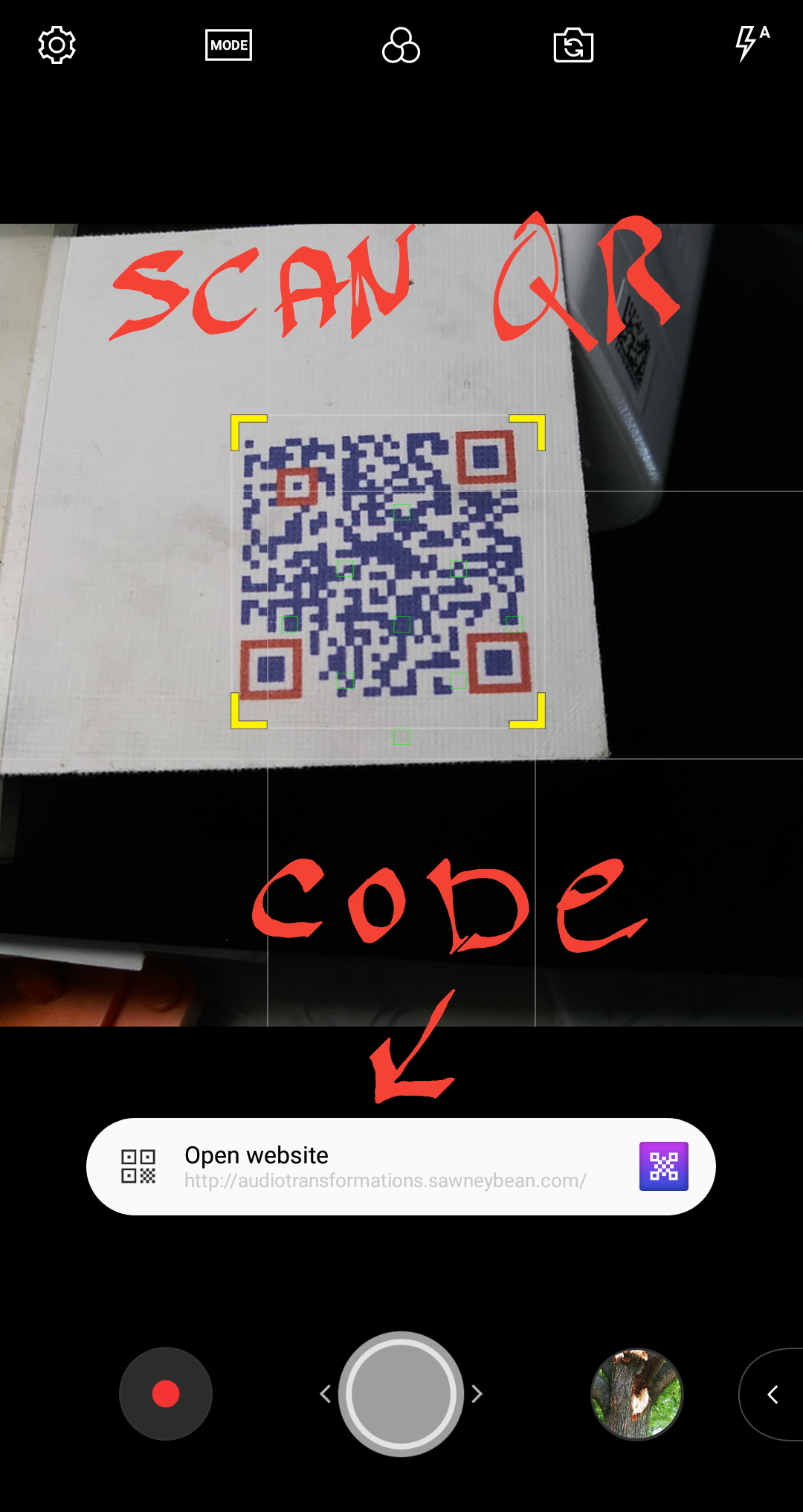 By the way, to create this screen I Captured it and then within a “Pop Memo” I drew the words I needed to indicate what this is about. I then saved the image to the gallery. Imagine being able to do this with colleagues at work. Create important notes, share, send, etc. It’s all very convenient and easy to do. Good job, Cricket!

Here are the Pen Settings: 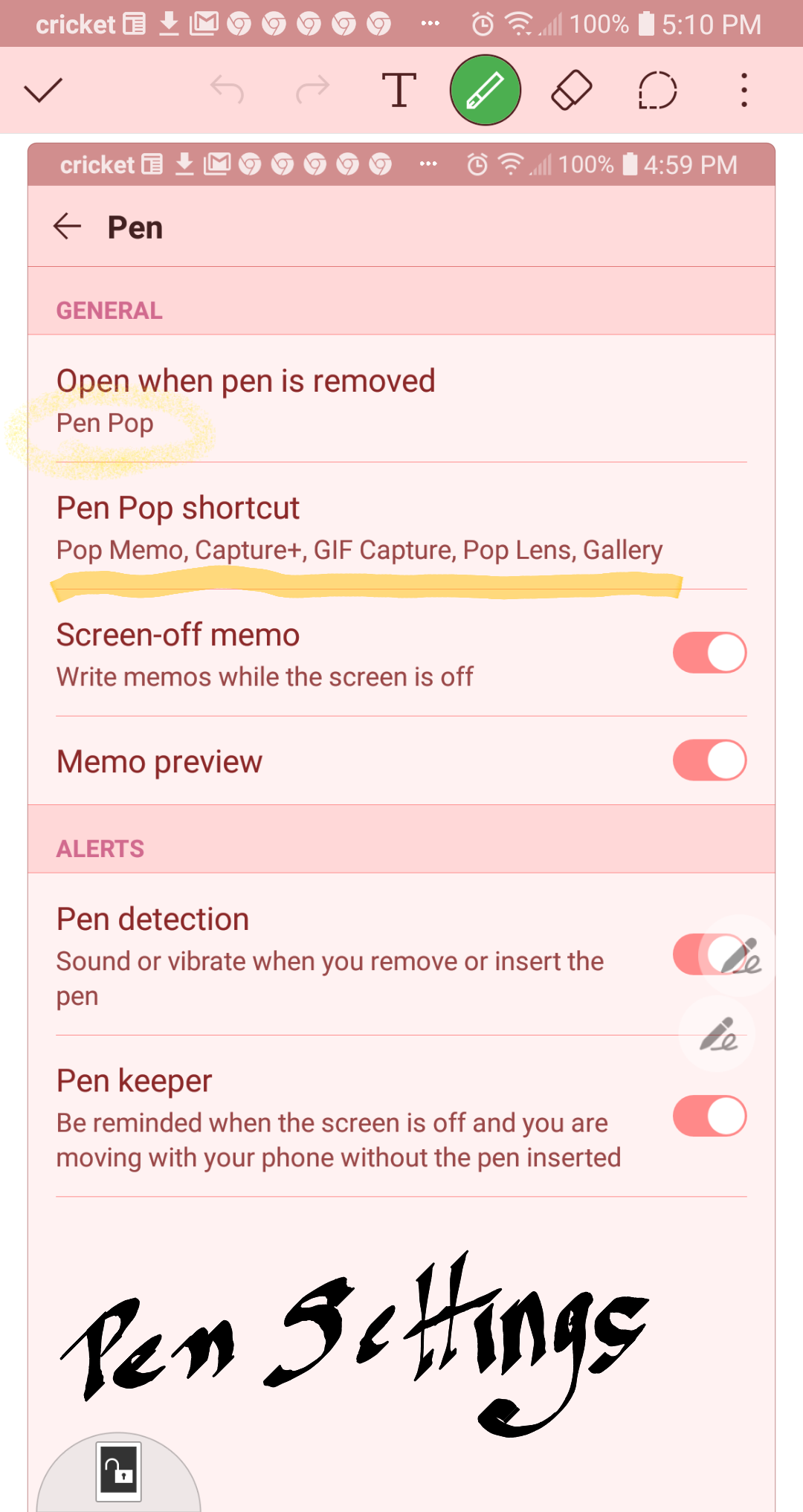 I turned them all on, as you can see. Now, I have access to these pen features as soon as I take the pen out of its slot.

Once you are in Pop Memo Mode you can choose the type of “Pen”, the color and how thick the line is. You can also choose to type and use the eraser. 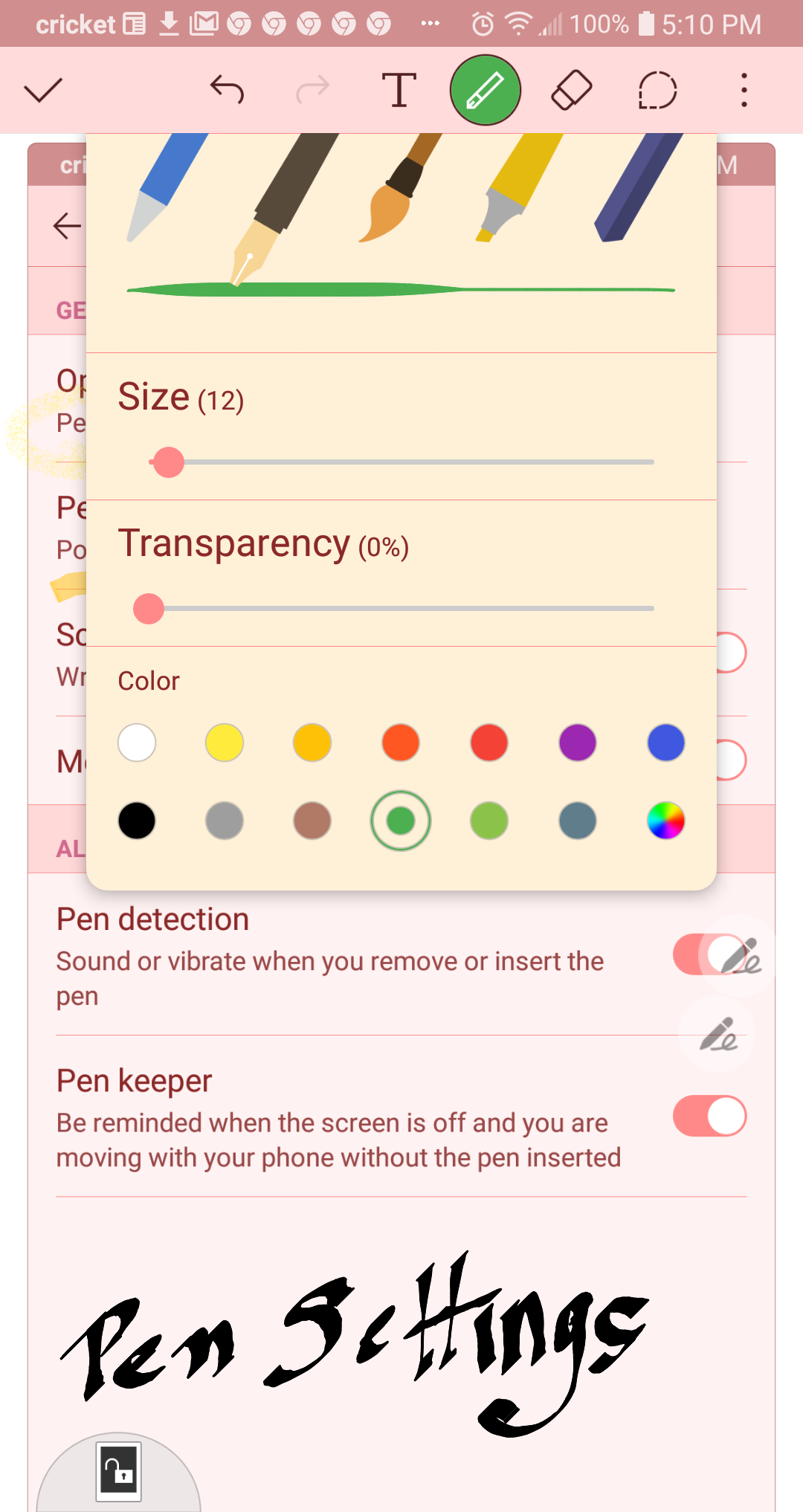 It took me a couple of tries but the “Pen keeper” setting does work. If the screen is off and you pick up your phone without the pen inserted it will pop up a notification like this: 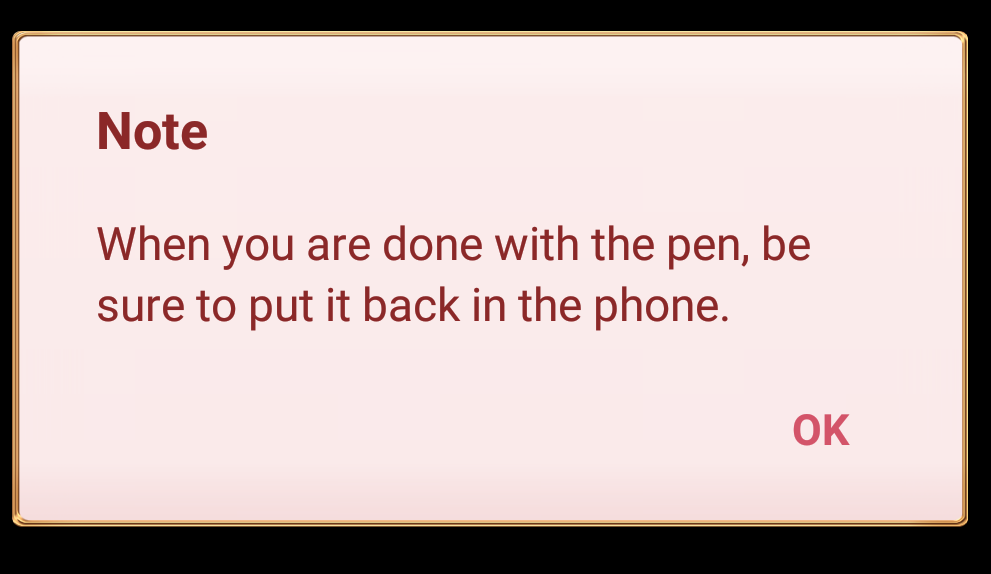 The thing is this notification won’t come on immediately. It takes at least 10 to 20 seconds as near as I can figure. If you aren’t paying attention to your phone you may not notice. I suggest, testing out several setting to be sure this will work for you.

One feature I have come to really appreciate on a smartphone is “Do Not Disturb”. Some phones leave you limited to one or two “schedules”. Fortunately, Cricket gives you the basic weekday/weekend schedule and the ability to add any new schedule. This is really useful in case you have meetings every Monday at 10 AM, and so forth. I’ve had some phones that just don’t let you be this flexible and I find it quite annoying. 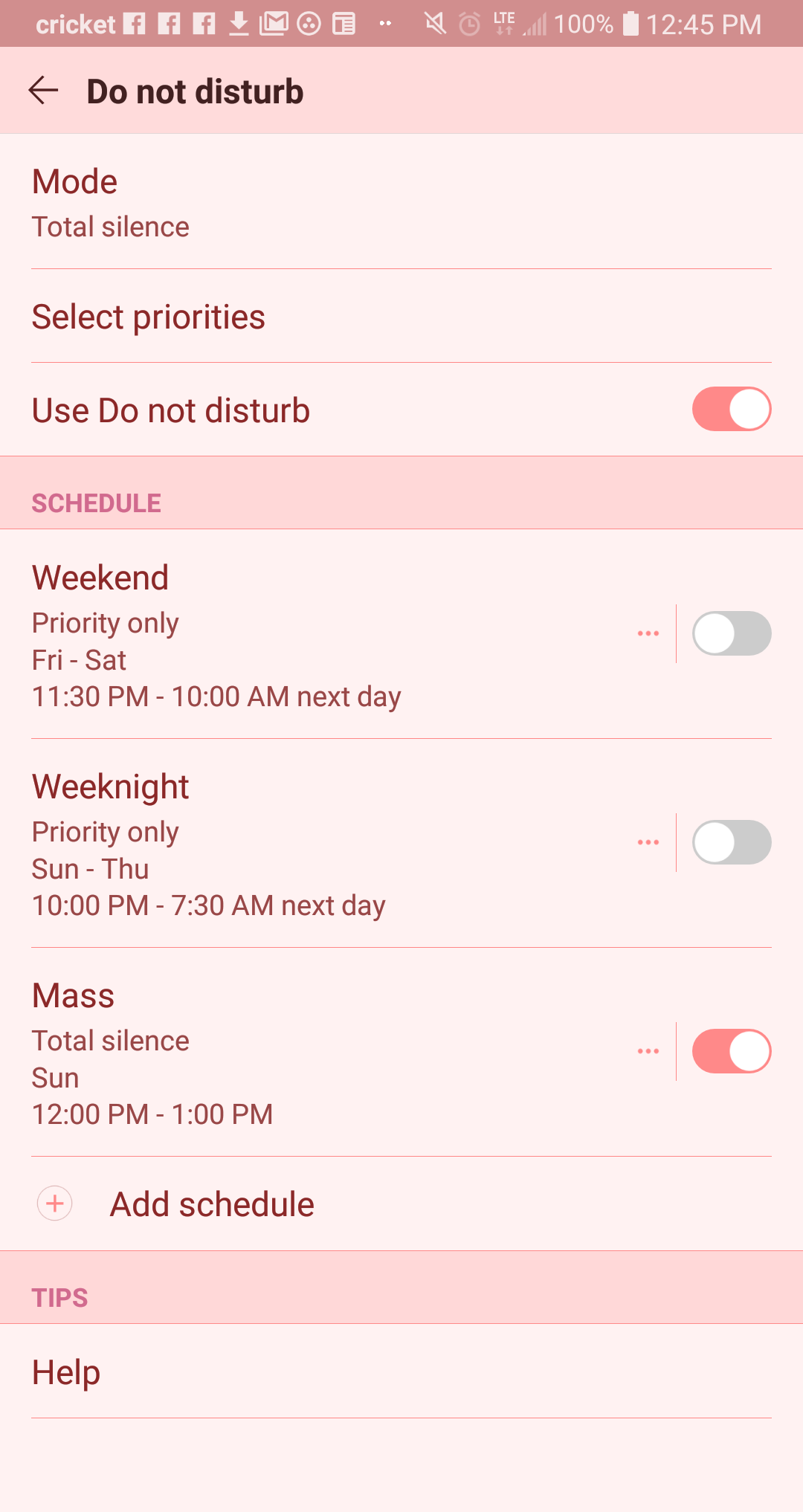 Another useful feature is an easy way to clean up those annoying useless files. And I don’t have to install another app. 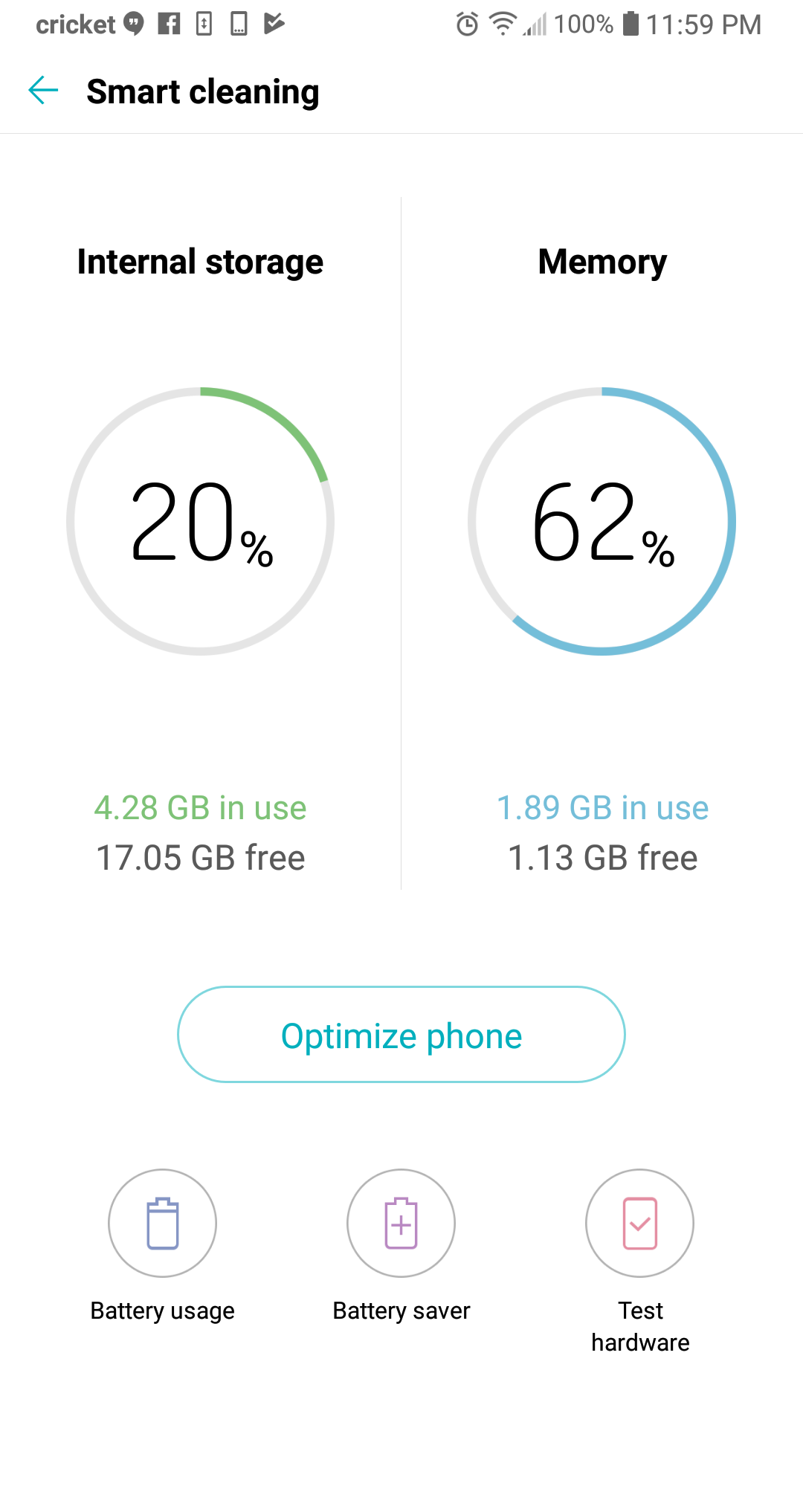 This feature lets you check your hardware in one place. 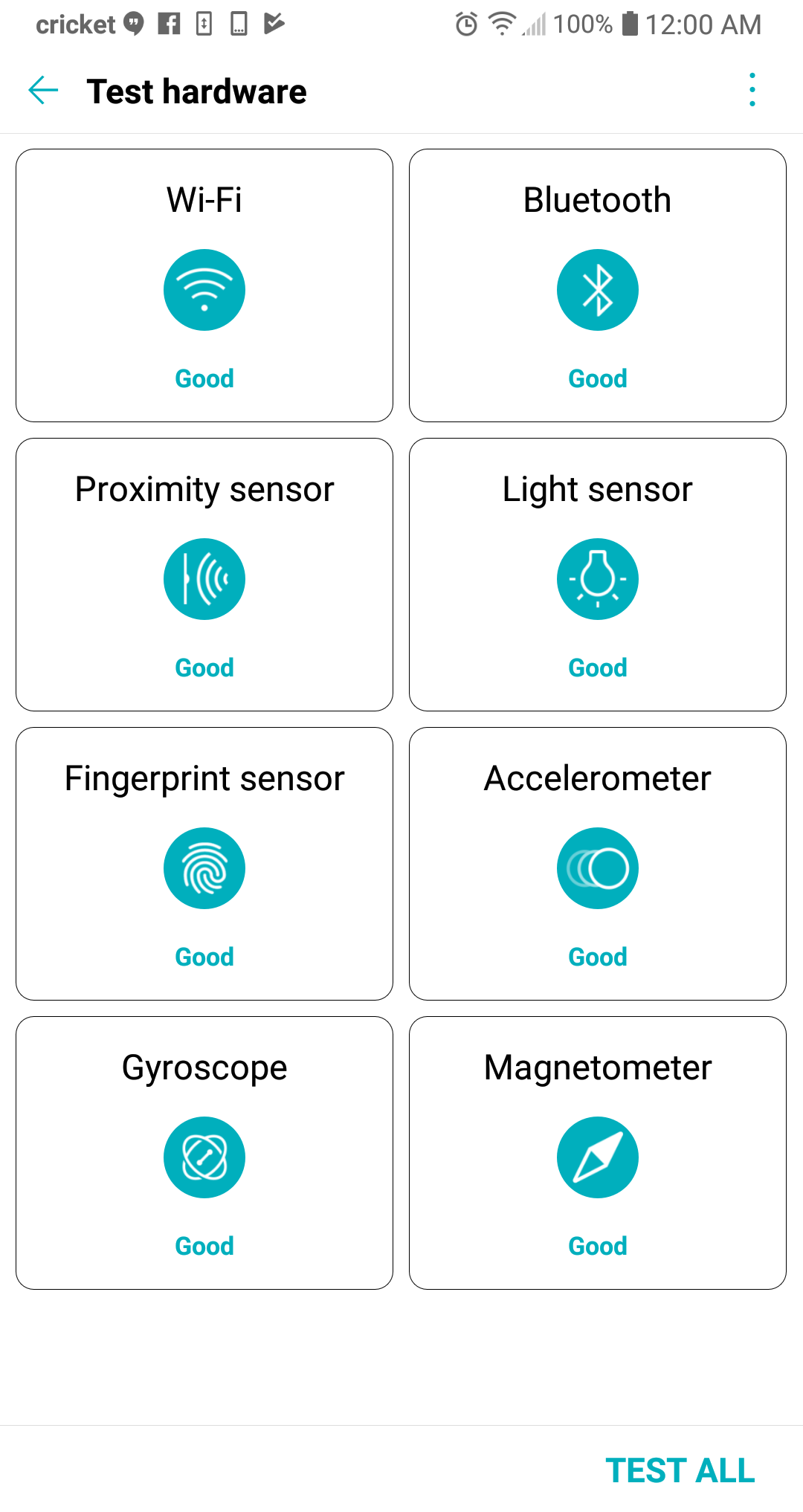 Next time I check out a few more interesting features on this  LG Stylo 4 phone. I must admit the “Metallic Lavender” body color is subtle and quite beautiful.