This time of year, I’m racing from place to place, as we all are, trying to get all of our Christmas events finished. There is a seemingly unending stream of parties, lunches, and shopping trips that occur between Thanksgiving and Christmas, and I can’t afford to be without my faithful holiday friend – my phone. The iPhone 11 Pro (my preferred mobile phone) has a powerful built-in battery (3046 mAh), yet after being out and about for several hours — sometimes all day — I still need to recharge it. My best portable batteries have built-in cords that can be connected to an outlet without the need for additional wires. Enter the MyCharge Hub Turbo. 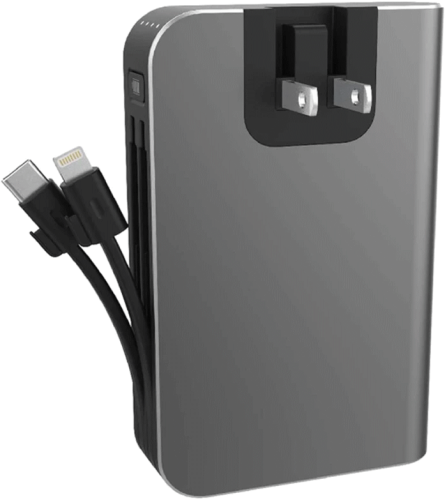 MyCharge’s Hub Turbo is available in two capacities: 10,050 mAh and 6,700 mAh (I have the latter). The Hub Turbo 6700 has a Lightning and USB-C connector and a USB-A port for any additional devices that may require extra power. Users may charge three gadgets at the same time. It’s intended to power tablets, cellphones, and other USB-connected gadgets. Because the Hub Turbo incorporates both Power Delivery and Quick Charge technologies, it can charge devices more quickly than comparable power banks in its class. In addition to the built-in cords, the Hub Turbo incorporates folding wall prongs for charging (or charging pass-through) while not in use.  (See on Amazon!)

The Hub Turbo’s size was one of the first things I noticed about it. For the past few years, I’ve carried a myCharge Hub-style power bank with me, and it’s always been around the same size regardless of capacity. When I initially handled the Hub Turbo 6700, it appeared much smaller to me. As a result of this view, I took out my myCharge HubMax Universal, a 10,500 mAh battery. When put side by side, the Hub Turbo 6700 is noticeably smaller than the HubMax. Although my previous HubMax had a bigger capacity, I like the compact size of the Hub Turbo 6700.

The myCharge power banks are slightly larger than other power banks. Still, I’m unwilling to sacrifice the convenience of having built-in connections and charging capabilities for a thinner form factor. Although the Hub Turbo is pre-charged, it is not completely pre-charged. The battery was showing a 75 percent charge right out of the box. I hooked it into my iPad Pro, and after approximately 10 minutes, the LEDs indicated that the battery was only 50% charged. Later that night, I hooked my phone into the Hub Turbo, and the LEDs showed 75 percent again, even though it had not been charged.

I tried charging my iPad Pro (2017, 10.5-inch), MacBook Pro (2016, 13-inch), and iPhone 11 Pro to put the battery to the test. When it came to charging the iPad or iPhone, the Hub Turbo had no problems. When it came to charging the MacBook Pro, the computer indicated it was receiving a charge from a power adapter and did offer an anticipated time until the battery was full. Given that the power bank can produce up to 18W of electricity, I believe it might be utilized to power a MacBook or MacBook Pro in a pinch. However, I would use it sparingly because it quickly drains the power bank and is not certified for charging a laptop.

When evaluating the power bank’s charging speed, I timed how long it took my iPhone 11 Pro to charge. After 14 minutes, it had gained 18% of its battery. This amounted to a billing rate of 0.78 percent each minute. This is almost 30% quicker than other power banks I’ve lately used, including the myCharge Hub Max.

I’m pleased with the myCharge Hub Turbo’s performance and design. I like how I can fast and easily recharge my phone by connecting it to this power bank. The Hub Turbo is a difficult product to surpass with its compact form factor and built-in wires.

Check it out on Amazon.com!